In the simplest possible terms, the Quasicrystalline Spin Network or QSN is a quasicrystal that we theorize is the fundamental substructure of reality. Imagine it as a 3D version of a 2D TV screen. A 2D TV screen is made up of 2D pixels that change brightness and color levels from one video frame to the next at a certain speed (for example 24 frames per second in most modern movies). Similarly, the QSN is a 3D grid of Planck scale, tetrahedron-shaped “pixels” that via the rules of a binary, geometric language/code, exist at each “frame” of reality as either on or off, and if on, then rotated left or right. These pixels populate the QSN, and their states change from one frame to the next, at a “universal frame rate” of 10^44 frames per second (Planck time). Over many of these frames patterns emerge on this 3D quasicrystal. These patterns become more and more meaningful and sophisticated with time. After a while, particles begin to form on the quasicrystal. With time, these particles take on more and more complex forms, and eventually the reality we all know emerges. 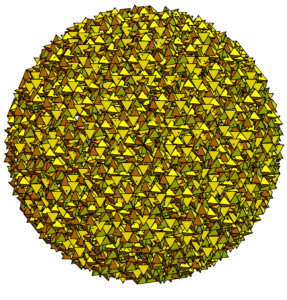 The QSN is the densest possible 3D network of point-sharing Fibonacci chains and is the most computationally efficient point space in 3D. It is created by taking the FCC lattice (a point space that provides the densest packing of 3D spheres) and then spreading its points until they are spaced according to the Fibonacci sequence. We then take this new lattice of Fibonacci spaced points, clone it five times and rotate the five clones from one another by 15.522 degrees to create the QSN.

As it turns out, the compound quasicrystal is an exact subspace of the QSN: the QSN contains all legal configurations of the Elser-Sloane, E8-to-4D quasicrystal.

The QSN therefore is deeply related to the E8 lattice and its 4D projection.

NOTE: Patterns on the QSN that have not been actualized as expressions of the code do not actually exist in some sort of “possibility space”. For information to exist, it must be actualized into existence by the process of recognition/registration by a form of consciousness. And if reality is information, then there is no real space of “no-information”. There is information that has been generated and information that can be generated but has not been. The latter type does not exist, ontologically speaking.